In 2016, Americans elected Donald J. Trump because he was different from anyone else ever selected to be President. He was not politically correct and more importantly, he was not a part of the Washington establishment. This led to a large swath of Americans voting for him and electing him President in 2016, much to the dismay of the media and Democratic leadership. Conservatives were not necessarily happy with Trump either, but the alternative was then candidate Hillary Clinton in which most conservatives had grown to despise.

Move forward now to 2020, and America has a different idea of what she wants. Now the voters have selected their grandpa to be President in electing Joe Biden. He is the American definition of what a grandpa is. He is old, he’s white, he has gray hair, and he sometimes says things that people chalk up to him just saying things that grandpa says.

Grandpa Biden can get handsy with children, sniff women’s hair, and look awkwardly at a woman’s chest and no one will say anything, because he’s grandpa. After all, that’s what grandpa’s do! They emulate what individuals would be thrown in jail for if they were 40 years younger.

Grandpa Biden also gets by with saying inappropriate things. He can say, “You aint black” if you do not vote the way he is telling you to. He can also say due to “some black woman stack(ing) the grocery shelf” that he was able to get groceries during COVID-19. He can blatantly insult an entire community of people by saying things like, “The Latino community is incredibly diverse, unlike the African-American community” because he is grandpa and no one takes grandpa seriously!

Grandpa can also say things about what his ideas are that change on a dime and not get called out for it. He can tell Americans that he will ban fracking and then later on come back and say he never said that. After all, he’s grandpa and his memory is not what it used to be. He can change his mind and say he only meant Federal lands, or say that it is just something we can work towards. He can say he is against the Green New Deal, while at the same time posting on his website that he indeed is for the Green New Deal.

This is what grandpa does. He says things that he means but then gets by with it because the family or in this country, the country, considers him to be a senile old man who doesn’t necessarily have all of his faculties. Since he is grandpa though Americans will love him, cherish him, just so long as they can excuse his ways of being based on that simple idea.

Joe Biden is President Elect of the United States, at least until those that wanted grandpa in charge decide that he is a little too much like a confused old man that he may need to go to the old folks home. The Democratic house will have the 25th amendment to help them do just that. We’ll just see what the to be determined Republican senate does in return. 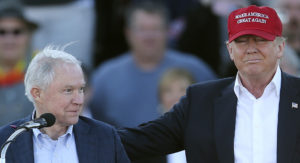 In 1986, US Attorney Jeff Sessions failed to get appointed to a United States district court in southern Alabama after being nominated by then President Ronald Reagan. The reason? Controversial remarks made by sessions saying that the NAACP and ACLU were “un-American” and “communist-inspired” as he felt that the organizations at the time “forced civil rights down the throats of people.”

This led to Jeff Sessions gaining a reputation for being a racist or holding prejudice against certain groups. Adding on top of this an alleged joke that he felt the KKK was an acceptable organization until he found out that they smoked pot. The controversial comments from sessions; joking or not, have been an area of contention for anyone that would be in charge of legal affairs for many different groups of people.

President-elect Donald Trump is offering the post of attorney general to Alabama Sen. Jeff Sessions, one of the Trump’s closest and most consistent allies.

Sessions is considered to be the fifth-most conservative US Senator who mostly sides with Republican issues. He has been known to support avenues that would create a Federal ban on same-sex marriage and would support putting ‘don’t ask, don’t tell’ back into place in the military.

It is unknown whether or not Sessions will accept the role of attorney General, but Sessions has been a lead supporter of Donald Trump for President since he announced his candidacy. The ongoing support for Trump from sessions could have been for the very seat that Trump is offering him.

Trump’s cabinet picks have been controversial in the past several days; with many upset over media executive Steve Bannon being picked as Trump’s chief strategist. In a nation divided on issues of race and sexual orientation, it has been alarming to many that these figures have been picked by Trump who have been previously accused of being discriminatory or prejudice towards certain groups.

Even with Jeff Sessions having a controversial past; if he accepts the seat, he should have no trouble being confirmed by a majority Republican Senate.

Will will continue to keep you updated on this story as more information becomes available.

I’ll never forget sitting down at Uno Pizzeria & Grill downtown Fort Worth one early summer evening. The atmosphere of Uno is always casual and dark. Sitting at a booth just a few rows back from the main entrance and enjoying a nice dinner with a friend of mine who I hadn’t seen in several months.

He had started going to school in the fall and I had been working. Transportation issues kept us apart, but we still kept in touch here and there. Our first meeting in awhile was fun and enjoyable, just as they had always been in the past. This night was different though. This was a night that he was going to put everything out on the line and it took many many years to understand the weight of what he was going to tell me. He was gay.

He didn’t come out and tell me directly. He made it in a joking manner by saying that he had ‘almost kissed his roommate.’ I honestly didn’t think anything of it at the time. I asked him why he hadn’t told me sooner and he was unsure about how I would react. This was 2002. I was 19 years old and honestly didn’t think much about anything in regards to people and the varying types of relationships. To me, this was my friend and it didn’t matter who he liked or didn’t like.

END_OF_DOCUMENT_TOKEN_TO_BE_REPLACED

One of the forefronts of First Lady Michelle Obama for the past eight years has been creating a healthier school lunch program for America’s children. With a new administration set to take over in January, this is another one of the Obama’s legacy that might just be on the chopping block.

Children grumbling about healthier school meal rules championed by first lady Michelle Obama may have reason to cheer Trump’s election as the billionaire businessman is a proud patron of Kentucky Fried Chicken and McDonald’s while promising to curb federal regulations.

In addition to Trump’s infatuation with fast food, Republicans in congress have often felt that the Obama administration’s food regulations have gone too far in the regulation of fat, sugar, and sodium.

The Obama administration pushed for healthier school lunches and the first lady began her signature ‘Let’s Move’ program in part due to the CDC reporting that obesity rates were nearly triple their rate in the past 30 years leading up to the current administration.

END_OF_DOCUMENT_TOKEN_TO_BE_REPLACED 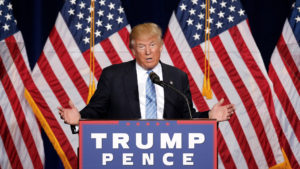 In typical Washington fashion, not everything is as easy as it seems. Campaign promises of Presidential candidates are only as palatable as the current or incoming congress allows them to be. In the case of Donald Trump’s promised border wall with Mexico, this is precisely the case.

Today House Majority Leader Kevin McCarthy suggested that Congress may not sign off on President-elect Donald Trump’s wall with Mexico.

The California Republican told reporters that the House will get to work right away on border security legislation. But McCarthy says there may be other ways to achieve border security than a wall — such as drone technology.

“No. 1 is it has to have a secure border. That may be a wall all the way through, or there may be other ways,” McCarthy said.

Trump campaigned on the promise to build a solid wall on the U.S. southern border and to make Mexico pay for it. In a CBS’ “60 Minutes” interview aired Sunday, Trump said that he’d accept fencing in place of a wall in some places.

END_OF_DOCUMENT_TOKEN_TO_BE_REPLACED 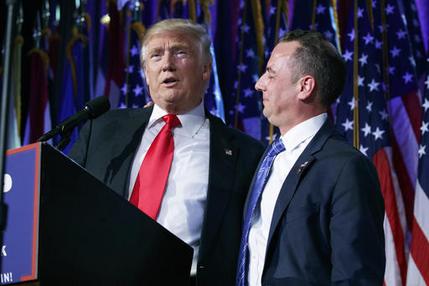 WASHINGTON (AP) — President-elect Donald Trump is considering a woman and an openly gay man to fill major positions in his new leadership team, history-making moves that would inject diversity into a Trump administration already facing questions about its ties to white nationalists.

The incoming president is considering Richard Grenell as United States ambassador to the United Nations. If picked and ultimately confirmed by the Senate, he would be the first openly gay person to fill a Cabinet-level foreign policy post. Grenell previously served as U.S. spokesman at the U.N. under former President George W. Bush’s administration.

At the same time, Trump is weighing whether to select the first woman to serve as chairman of the Republican National Committee. On his short list of prospective chairs: Michigan GOP chairwoman Ronna Romney McDaniel, the former sister-in-law of Trump rival and 2012 presidential nominee Mitt Romney.

“I’ll be interested in whatever Mr. Trump wants,” McDaniel told The Associated Press on Monday, adding that she was planning to seek the Michigan GOP chairmanship again

END_OF_DOCUMENT_TOKEN_TO_BE_REPLACED 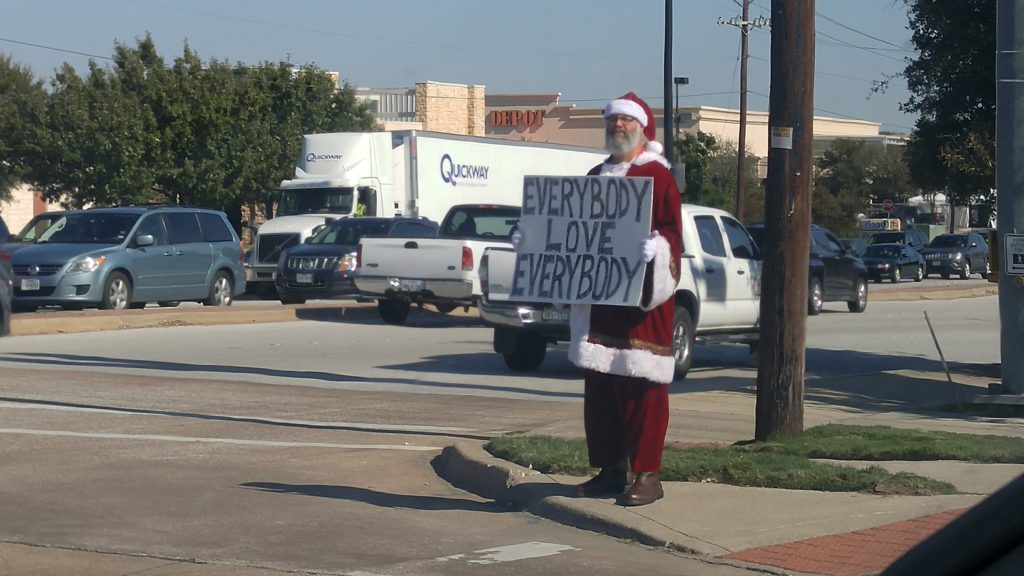 Man in Santa suit trying to bring cheer to drivers in Keller, TX.

Sometimes in the face of adversity, we can find a beacon of light. That light is the time of year in which we are approaching. Less than 2 weeks from now many of you will be sitting down with your families and enjoying a Thanksgiving lunch or dinner. Some of you will choose to keep the gathering small, while others will have a big family feast. Some who are reading this will possibly be sitting down somewhere they never thought they’d be. Some will sit down in a church or one of the many cafes that will be offering free meals to those less fortunate. Most of us will be sitting down and giving thanks in one way or another.

For some, this will be their first American thanksgiving. Many immigrants come to the United States in search of hope. They travel from all across the world looking for a new opportunity in their lives. Many will be thankful to just be here and away from some of the atrocities they saw in the countries they came from. We often forget in the political dialogue we share that people are often times escaping oppression and tyranny. We as Americans do our best to welcome them, but also let them know that we don’t want them to forget why they came to our country. We fight among ourselves bickering over the status of these people and bicker about wanting these people to assimilate to our way of life. We seem to forget though; that if this is their first Thanksgiving here, all they know is where they came from.